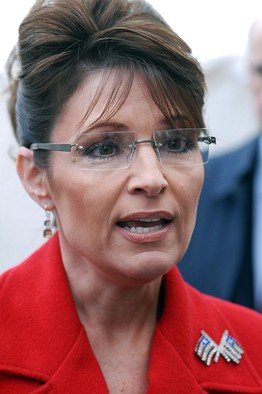 Uh oh. My friend Alex Grossman emailed me last night that the prank's over, he just got caught being "Governor Palin" on Facebook. Remember that day, months ago, when we could all log on to Facebook and register our names? Well, Alex registered his, like the rest of his. And then -- oops -- Alex registered for Governor Palin. He meant well. No he didn't. And then he started having more fun, as his fake Palin page attracted legions of real Palin (and Jesus) supporters. The more "friends" he made as Palin, the more daring he became in engaging them. As Palin, he encouraged them to "talk to a gay person today," "touch a black person," you get the idea.... Katherine Rosman broke the story in the Wall Street Journal this morning. Here's an excerpt from Katherine's piece about Alex: Using a photo of Palin sitting in a car with her seatbelt on and writing a message that read, “Happy 4th of July and God Bless!?!”, Grossman posted his page. Almost instantly, he found himself with about 100 requests from people wanting to be his – uh, Governor Palin’s – friend. He accepted them all. Updating the page almost every day, Grossman said he most often posted earnest messages about Palin’s love of God and country. But on occasion, he wrote posts he intended to be overtly satirical, so as to “tip my hat to those that I thought knew better,” he explained. He posted messages like, “I need a salmon recipe for tonight. Todd just brought home a fresh one. Something spicy!” (Dozens of “friends” sent recipes in response.) Another update read, “GOD LOVES US ALL, no matter how black or African, or even gay or Jewish we are.” He though for sure people would catch on when he, as Palin, became a fan of Strunk & White. For the full story, click here For more about Alex Grossman, who happens to also be a crazygood TV, film, web & commercial writer and producer, click here For the real Alex Grossman on Facebook, click here
Somebody showed me these a while ago but I can't get them out of my head. This next one's rockin' some robot parkour. As a side note, it's gotta be the only commercial spot in which you'll ever see Kodak and HP logos in the same frame (:30 secs in). I'll send it to Jeff Hayzlett and Todd Bradley for fun...
Newer Posts