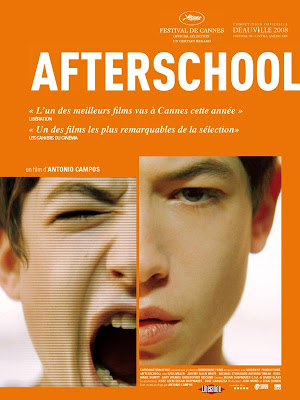 Is this movie going to make you laugh? Probably not even once. Is it going to make you go out and buy the soundtrack? Nope, there is no music in the movie. So why am I recommending AFTERSCHOOL so strongly? -- (darn, promised I would be "more nicer" after Yom Kippur.) I first heard about Antonio Campos from his manager, my friend, Melissa Breaux of Washington Square Arts. That was like 3 years ago. Antonio's least appreciated in America, but he's our greatest young American filmmaking hope. You know who loves him? Cannes. The French get him. The Germans do too, I think. He is beloved in Armenia. Even the New York Times and The Village Voice. So what are the rest of us waiting for? Nothin. It's time. Watch this trailer. See this movie. Then join me in welcoming one of the most original, visionary voices in independent film in years. There's just nobody like Antonio Campos. Nobody. See for yourself... PS Check out Antonio's incredible music video for The Shins, which was #1 on the college charts for 3 months.

Previous PostDear David Hasselhoff, Please Make More Music Videos
Next PostWe Had A Tiff, Now He's Got One With Conan O'Brien, But Newark Mayor Cory Booker Is My Friday Follow On Twitter