I was recently interviewed by the Viacom Blog.  There I talk about the power of Viacom innovation, the origin of Scratch, and my gratitude to the friends and colleagues who’ve worked so hard and so brilliantly, side by side with me for the last ten years.  We’re a team.  Fortune Magazine noticed, and it highlights our work in its new issue of the 40 emerging business leaders under 40 years old.  I’m honored to be in such  esteemed company, and so proud of what this incredible team stands for at Viacom.

If you are on a conference call right now, put it on speaker, put it on mute, click here and download the “Face Stealer” app from Yahoo! Japan.  Here’s an example…

This is Patty from Scratch: And this is Patty and me, together: From the description on TED.com:

What you say rarely communicates exactly what you mean — but that’s not necessarily a bad thing. Television producer, Ross Martin draws on the principles of poetry to reveal how the ‘magical consequences’ of being misunderstood can drive originality. 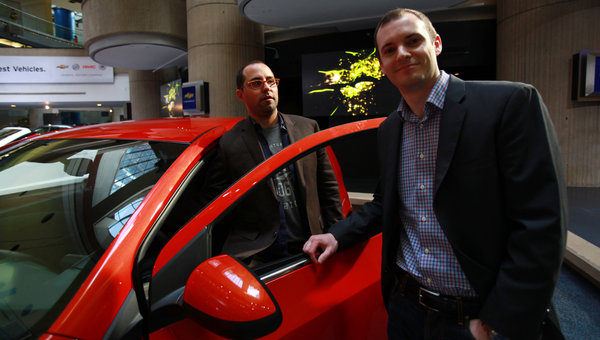 Ross Martin, left, of Viacom’s creative strategy unit, is working with General Motors to help revive interest in cars among young consumers. Mr. Martin and John McFarland of Chevrolet are shown in G.M.’s headquarters in Detroit.

As Young Lose Interest in Cars, G.M. Turns to MTV for Help

DETROIT — Ross Martin, 37, is a published poet and a former drummer in an alternative rock band. Wearing Nike high tops and loosefitting jeans, he is the kind of figure who wouldn’t attract a second glance on the streets of Brooklyn, where he lives.

But on a chilly afternoon here last month he managed to attract a few odd looks as he walked across the 24th floor of General Motors’ global headquarters. Mr. Martin is the executive vice president of MTV Scratch, a unit of the giant media company Viacom that consults with brands about connecting with consumers.

He and his team are trying to help General Motors solve one of the most vexing problems facing the car industry: many young consumers today just do not care that much about cars.

That is a major shift from the days when the car stood at the center of youth culture and wheels served as the ultimate gateway to freedom and independence. Young drivers proudly parked Impalas at a drive-in movie theater, lusted over cherry red Camaros as the ultimate sign of rebellion or saved up for a Volkswagen Beetle on which to splash bumper stickers and peace signs. Today Facebook, Twitter and text messaging allow teenagers and 20-somethings to connect without wheels. High gas prices and environmental concerns don’t help matters.

“They think of a car as a giant bummer,” said Mr. Martin. “Think about your dashboard. It’s filled with nothing but bad news.”

There is data to support Mr. Martin’s observations. In 2008, 46.3 percent of potential drivers 19 years old and younger had drivers’ licenses, compared with 64.4 percent in 1998, according to the Federal Highway Administration, and drivers ages 21 to 30 drove 12 percent fewer miles in 2009 than they did in 1995.

Forty-six percent of drivers aged 18 to 24 said they would choose Internet access over owning a car, according to the research firm Gartner.

Cars are still essential to drivers of all ages, and car cultures still endure in swaths of suburban and rural areas. But automobiles have fallen in the public estimation of younger people. In a survey of 3,000 consumers born from 1981 to 2000 — a generation marketers call “millennials”— Scratch asked which of 31 brands they preferred. Not one car brand ranked in the top 10, lagging far behind companies like Google and Nike.

The five-year strategic vision that Scratch has developed for Chevrolet, kept quiet until now, stretches beyond marketing to a rethinking of the company’s corporate culture. The strategy is to infuse General Motors with

Last month, I tried to impress the shit out of my parents by hooking our family up with a sweet bungalo (thank you, Pam Kaufman!) at the Nickelodeon Hotel in Orlando.  I stacked the room with fresh fruit and other treats, and even had my mom’s favorite cocktail, a (virgin) pina colada, waiting for her when she arrived.  It was awesome.

If you’ve got kids of Nickelodeonesque age, you gotz to go.  Don’t miss the massive sliming ritual, poolside, where the biggest bucket of green goo you’ve ever seen is dumped on ecstatic crowds.  Epic.

I got a SpongeBob temporary tattoo, and she realized her son’s truly gone on from poetry school to corporate tool.  (I can still rhyme, bitches.) At least I didn’t blog about getting a SpongeBob tattoo.  Oh, wait.

Anyway, look at me now, mom.  It’s “Dude Week” at a Jewish parenting blog called “Kveller,” and your boy is all over it like schmear on a bagel.  That’s right, mom.  I even talk about Shabbat Dinner and stuff in interviews to make you proud.

The KidScreen Summit is different and fun, and the panel Amy Friedman (President, RedHead Consulting) is hosting at this year’s conference should be a winner.  I’m psyched to join the inimitable Jonathan Mayers (co-founder of Bonnaroo and Superfly Presents), the legendary Fred Seibert, and inspiring sherpa Amy, as we explore the power of the people we program for (and answer to).

How do the most powerful and innovative brands in the world use the creative power of the audience to shape their businesses and brands? A stellar panel of innovators and visionaries from beyond the world of kids entertainment will share their wisdom and best-practice experiences in bringing their audiences into the mix as true creative partners-and how harnassing their ideas, content and conversation is changing the game for all of us.