Game over. This wins. Hands down.
Ray Kurzweil invented the Kurzweil keyboard, predicted the fall of the Soviet Union, and foresaw the defeat of chess genius Gary Kasparov at the hands of a computer. I heard Ray speak at Summit Series a few weeks ago, and the guy had the same effect on me that he had with everyone else in the room -- We were all pretty stunned. So I bought his book, which I should have done years ago, and began reading it. Ray's book, THE SINGULARITY IS NEAR, ponders a post-biological world in which the course of human development leads us to inconceivable heights of intelligence, progress and longevity. Meaning, among other things, that we will have microchips in our brains and bodies in the next 25 years. So when you want to learn how to play chess, you can just embed the chess chip in your head. Why read a book, when you can just download it into your brain. Got a disease? Just download a program to kill it. The permutations are driving me nuts, so I try not to think about what this will mean for our kids. Most mornings, I check out Shelly Palmer's blog. Last week, Shelly did a post about Mark Gasson, a British scientist, who wondered what would happen if the computer chips in surgically implanted prosthetics got computer viruses. To find out, Mark infected himself with a computer virus. Shelly commented: "Sound funny? No one is going to thinks it's funny when computer virus on a wireless network can kill you. It may sound like science fiction, trust me, it isn't." Here's Engadget's frighteningly real story.
Zoo Press published my book of poems, THE COP WHO RIDES ALONE, in 2002. I think like 25 people bought a copy, and that's 'cause they were just being nice or are in my family. Then they all sold their copies back to The Strand and Amazon. By the way, you can buy this amazing book right now for $1.82... 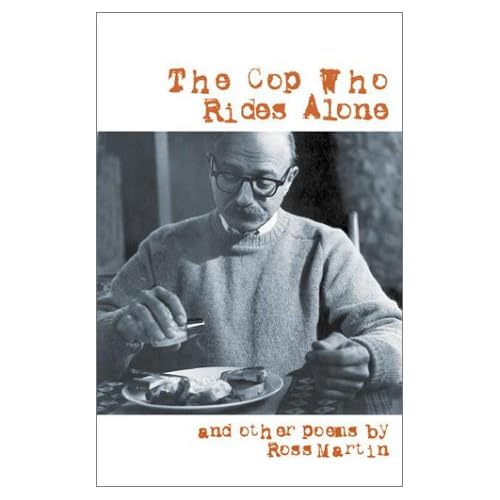 In the absence of publishers' marketing budgets for books not written by celebrities and their mistresses, it's funny what people will do to get you to care about a book they've written. Sloane Crosley wrote a book called I WAS TOLD THERE'D BE CAKE. I am going to go buy it. To promote her book, Sloane made dioramas. Yes, dioramas. Witness her moment of eureka as she had the idea: Plexiglas! Yes! It was like The Graduate redux. I could turn my essays into three-dimensional dioramas and at least attempt to make them as detailed as the ones I used to make with my dad. So I picked three essays—“Sign Language for Infields,” “Smell This,” and “The Pony Problem.” I figured they were the most visual and that they would lend themselves the best toward diorama production. They're actually kinda cool-looking: And there's even a music video:

I Was Told There'd Be Cake by Sloane Crosley from Book Videos on Vimeo.

But as Ashley pointed out today, it's unclear why Sloane didn't really commit to the diorama theme for her whole website, using that navigation to enhance (and attract us to) her book. Anyway, Sloane seems like she's just getting started on this stuff, so I assume there's more to come. (And, jeez, she wrote the book, how come she has to figure out how to get you to care about buying it, too? Oh yeah, it's 2009.) Speaking of more to come. Remember Daniel Nester? If you have as much back hair or if you like Freddie Mercury as much as Dan does, you have a problem. Well, Dan has a new book coming out this fall, and I am pre-ordering it for all my friends. It's one way I can apologize for all the inappropriate things I have done and will do.

To get you to care about his book before it's even published, Dan seems to have made this short little teaser:

Anyway, my advice to Dan is that he begin some inappropriate tweeting immediately, getting more and more inappropriate until the book drops this fall. I'll follow you.