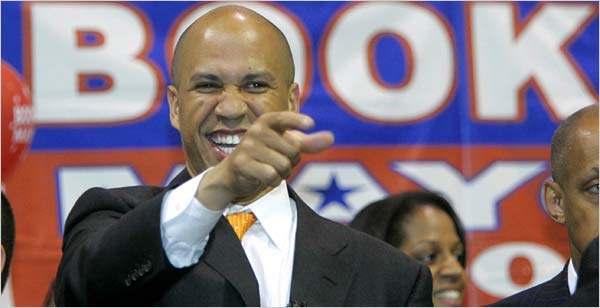 It's hard not to be inspired by what Newark Mayor Cory Booker's accomplished so far in the city I grew up next to and terrified of. Did you catch Mark Levin's Sundance Channel documentary on Cory last week? Last I remember, Newark's where my grandpa got mugged in the pharmacy he owned.  The new Newark =  tough on crime, community revitalization, Kenneth Cole, public-private partnerships and economic development.  Nice! I follow Cory on Twitter because he's mostly a great twittererer. For example, he recently used Twitter and YouTube to launch a manhunt for a suspect who shot a 4 year-old girl on a playground in Newark: And it worked: The next day, "due to enormous public pressure," the suspect turned himself in. By making his leadership transparent, Cory stands in stark contrast to his predecessors (many of whom have gone to jail after being mayor), keeping us invested in Newark's progress as it struggles to become a safer place and rediscover its old glory. Twitter means the passion -- and the tactics -- of Cory Booker are visible, measureable and real. And he doesn't back down. Like, for example, the thing with Conan O'Brien. You wanna treat Newark as a punchline? Cory punches back: So after further consideration (and some Yom Kippur), I feel badly for getting on Cory about his flirtation with Kenneth Cole, a few weeks ago. It started when Cory began quoting Kenneth Cole on twitter. No one should ever quote Kenneth Cole, he does enough of that on his own stupid bilboards for the last decade. So I had to interject. Here's our exchange, word for word, starting with his tweet: From Cory Booker: Before u judge, walk a mile in the person's shoes, & if u still don't like them, at least your a mile away & have their shoes (via Ken Cole) 8:43 PM From Ross Martin: You're a brilliant guy, @CoryBooker, a true leader. Many of us are already backing you. So you don't need to quote someone like Kenneth Cole 8:52PM From Cory Booker: He is a good friend and a leader in many important causes. Proud of him and proud to quote him. 8:55 PM Then, not hours later, Kenneth Cole himself started following me on twitter. Creepy! Ok, Cory -- I'm sorry I ragged on your friend Ken Cole. Listen, I'll make it up to you. I've been meaning to tell you how much I love the Newark Public Library, which is actually an awesome place. We can go have coffee in the special collections section, which is surprisingly terrific, and talk about doing a reality show. Wait, did you just call me?